On the afternoon of Saturday, September 10, 2011 the Friends of Camp Kenan, along with the Tobin family, hosted a dedication of the newly renovated “Old Chapel in the Woods.” The Chapel was renamed the “Michael Tobin Memorial Chapel.”

Michael Tobin was born on December 11, 1970. He grew to be quite an athlete; he played little loop football, and in junior high, became a runner, a swimmer, and a diver. Unfortunately, Mike was born with a hole in his heart that was not problematic until he was a teenager, and soon he be-came unable to do those activities. As a junior in high school, he had open-heart surgery to repair the hole in his heart. When that surgery failed to improve his condition, he was put on a heart transplant list. After he graduated from Lockport High School in 1989, he intended to attend the State University of New York College at Geneseo, but his health would not per-mit it, so he enrolled in classes at Niagara County Community College. He was often ill but determined to go to class, if only to stay active.

On September 21, 1989, Mike became the recipient of a new heart. The surgery was considered successful and he recovered quickly. After only two weeks in the hos-pital, he was sent home. Sadly, the next night his body rejected his new heart. He went into cardiac arrest and could not be revived. It was devastating to his dear fam-ily and friends. He was survived by his parents, David and Cathy Tobin, his younger siblings, Renée (a former Camp Kenan counselor) and Christopher (a for-mer Camp Kenan camper). Michael also left behind many dear friends from Camp Kenan.

At Camp Kenan, Mike’s home away from home, he was a camper from 1980-1984, a CIT turned Counselor from 1985-1988, and in 1989, at the age of 18, he returned to camp as a “Good Visitor.” The Chapel was one of Mike’s favorite places at camp, as it was for many. Indeed, he asked his family to spread his ashes there should he not survive, which they did. After Mike passed away on October 8, 1989, the Tobin family placed his ashes in the Chapel. Over the years the erosion wore away the earth there, much of the Chapel grounds and trees were lost, and the Chapel became unusable.

The Friends of Camp Kenan are pleased to be able to honor the loving memory of Michael Tobin by bringing back to life the “Old Chapel in the Woods” with a new look (but with the same old feel) and a new name. We are grateful that Camp Kenan’s very own William H. Heller lead the dedication and memorial service, along-side other friends. All were invited to attend this special Goosestock event to listen to and share memories of Mike.

No spot is so dear to my childhood… As the little brown church in the vale...


Thank You to Everyone Who Has Helped Make This Possible

We would like to especially recognize the following for their contributions! 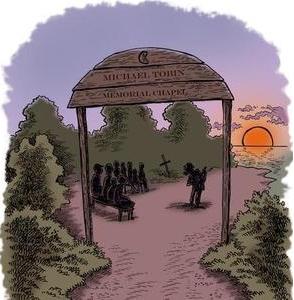 Host: The Tobin Family & the Friends of Camp Kenan